Michael decries using sex as a weapon while the band goes for a suitably bitter and groiny feel. It's pretty funny.

You’ve got a little worry,
I know it all too well,
I’ve got your number,
But so does every kiss-and-tell
Who dares to cross your threshold,
Or happens on your way,
Stop laying blame.
You know that’s not my thing.

Who am I to deny her happiness?

What kind of person sucks all the confidence & humor out of "The Joker" but keeps the squawk-box?

A jingle for headache medicine that might give you a migraine. Crafty!

Back off, I'll take you on
Headstrong to take on anyone
I know that you are wrong
And this is not where you belong

It's a little dated.

Promises, promises
Old tired, worn out second hand sentences
One thing, with you is certain
You’re a really sad person. So sad.

Probably the only "musician, writer, historian, and cosmic shaman" (AMG) who ever sounds like Howard Jones giving props to XTC. 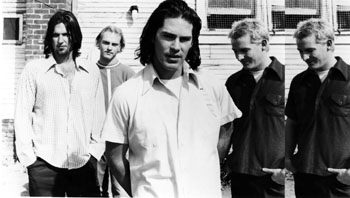 The aggrivating hook is nestled in a sweet song about the casually liberal theology of a tyke, but it took almost a decade after its omnipresence for me to notice. "Shine," another nightmare from my youth, sounds even worse today, so Dishwalla was doing something right.

David Spak, a friend from high school, told me that he had to endure the entirety of this epic during his driving test. I can only imagine what kind of hell that was.

Wake up the dawn and ask her why
A dreamer dreams she never dies
Wipe that tear away now from your eye
Slowly walking down the hall
Faster than a cannonball
Where were you when we were getting high?

Saliva is, without question, the worst band name I've ever heard of. What also makes this drama-rawk interesting is the curiously gendered lyrics printed below. But that's it.

Caught between eras of Westerberg tribute (this song has nothing on All Shook Down's "Nobody") and unabashed VH1 balladry, "Name" isn't as moving as their music once was and would be again. P.S. I am not insane.

Knowing that pretentious, godly-to-the-newbie mushmouth has always been the status quo with collegiate rock makes me sympathize with the youth of today. It also makes me loathe my inner adolescent.

Back in the day, modern rock was about making you think. Capturing the socialist desires of the proletariat in an arguably jaunty jingle. That kind of thing.

So I’m caught at the junction still waiting for medicine
The sweat of my brow keeps on feeding the engine
Hope the crumbs in my pocket can keep me for another night
And if the blue sky mining company won’t come to my rescue
If the sugar refining company won’t save me
Who’s gonna save me?